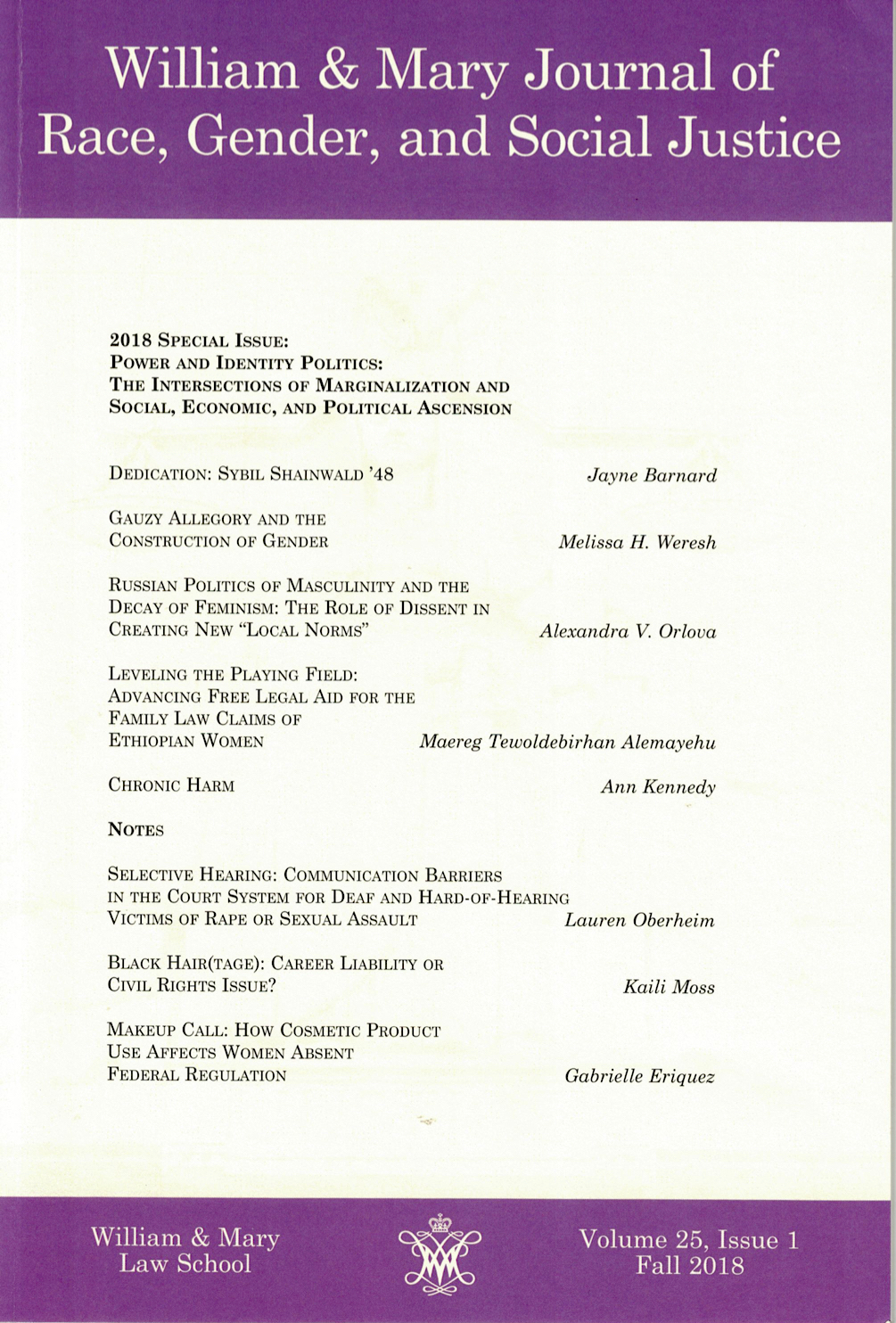 Dedication by Jayne Barnard [a1]

William & Mary--not only its Law School--can claim many successful lawyers and judges among its alumnae. One of the most influential of these women is Sybil Shainwald.

Ms. Shainwald--then Sybil Schwartz--was an exceptional student at William & Mary. She was the President Bryan Scholar and she graduated Phi Beta Kappa.[1] She has recalled that coming from New York to the South for college was a “culture shock” for her.[2] “There was prejudice against African Americans and there were few other Jewish students at the school.” When the Flat Hat editorialized that it was time for the College to accept African-American students, and the Editor-in-Chief was removed from her position and threatened with expulsion,[3]Shainwald joined a student strike. “I think I was born a feminist and an activist,” Shainwald later said.[4]

After marrying Sidney Shainwald, a man who combined a love of art and theater with the exactitude of his training as a CPA, and having four children--Robert, Laurie, Louise, and Marsha--Ms. Shainwald renewed her education, doing graduate work in history at Columbia University.[5] She received her M.A. in 1972.[6]

Ms. Shainwald had applied to Columbia's Law School in 1962, but was denied admission on the basis of age and gender. She was told that she “[would] take the place of a man who [would] practice law for 40 [sic] years.”[7] Ten years later, the passage of Title IX banning sex discrimination in higher education made it possible for her to reapply--this time to New York Law School's evening division.[8] She graduated from law school in 1976, after attending classes at night and concurrently serving as director of the Center for the Study of the Consumer Movement at Consumers Union,[9] a position made possible by a grant from the National Endowment for the Humanities.[10]

Throughout this time, Sidney Shainwald was an extremely supportive partner.[11] He, too, was interested in social and economic justice. As Senator John Kerry noted, “Sidney Shainwald had a remarkable career as really the person who created consumer awareness ... and did such an extraordinary job in changing people's [lives].” [12]

Ms. Shainwald began her practice with Alfred S. Julien, a New York trial attorney.[13] Soon she “found the cause of a lifetime: women's health reform.”[14] The Julien firm “brought a landmark case against the pharmaceutical companies marketing DES [(diethylstilbestrol)], a drug for pregnant women that ... adversely affect[ed] the reproductive systems of their offspring.”[15]DES caused vaginal cancer, in-fertility, and reproductive anomalies in both girls and boys.[16]

Since that first case, Ms. Shainwald has been involved in scores of DES cases and class actions.[19] She also litigated dozens of cases representing women alleging harm caused by birth control pills, the Dalkon Shield, and various breast implants.[20] According to a citation presented to her by Columbia University in 2009,

[t]he list of landmark cases in reproductive rights with which you have been involved is lengthy. You have challenged multi-national corporations on behalf of women in the United States and in developing countries harmed by contraceptives and medical devices whose side effects had a far-reaching and sometimes permanent impact on their health. For these women, so often ignored or dismissed, you have fought for recognition, for compensation, and for regulation that will protect future generations. [21]

New York Law School has also recognized Ms. Shainwald, with its President’s Medal in 2007. [22] The Law School's citation recounts many of Ms. Shainwald's impressive accomplishments as a lawyer:

Sybil Shainwald's legal career has focused almost exclusively on women's health issues. She was co-counsel in Bichler v. Eli Lilly, the nation's first DES daughter victory, and she has litigated thousands of cases involving drugs and devices harmful to women and their children. In doing so, she has transformed the practice of mass torts in order to advocate health issues for American women and women in developing nations. Ms. Shainwald represented two thousand women in a Dalkon Shield case against A.H. Robins and obtained [equity] for the women of Bangladesh, India, Kenya and China ....

She has been a vocal opponent of the use of Norplant and Depo Provera, two long-acting contraceptives, especially in developing countries. She represents women of the world in the breast implant litigation and was successful in setting up a $25 million fund for the benefit of women outside the United States. She also filed a class action resulting in an Emergency Fund for DES daughters.

She has pioneered in many areas of women's health bringing the initial cases for the lactation suppressant [Parlodel], and the pregnancy test, chronic villus sampling. She was instrumental in expanding the Statute of Limitations for women's health cases in New York, and filed the first case under the Revival Statute. [23]

Ms. Shainwald has served as the Chair of the Board of the National Women's Health Network, on the boards of the Consumer Interest Research Institute, the Hysterectomy Educational Resources and Services Foundation,[24] the Washington National Opera, New York Academy of Art, and New York Law School.[25] She was a founding member of Trial Lawyers for Public Justice.[26]

In 2013, when this Journal was still known as the William & Mary Journal of Women & the Law, Ms. Shainwald authored an important article, “Reproductive Injustice in the New Millennium,”[27] recounting the origins and development of American abortion restrictions and in analyzing the risks posed by abortion limitations then emerging in several states.[28] Recent developments only confirm her apprehensions of the time. As has often been the case, Ms. Shainwald was looking to the future, and anticipating the ways in which the law often pivots, shifts and retreats.

In addition to the recognition she has received from her graduate school and her law school, Ms. Shainwald has also received the Susan B. Anthony Award from the National Organization for Women,[29] the Edith I. Spivak Award from the New York County Lawyers Association, the Guardian of Women's Health Award from the Institute of Jewish Humanities,[30] and the Leadership Award for Public Service from New York Law School. [31]

In 2012, Ms. Shainwald was inducted into William & Mary's chapter of Omicron Delta Kappa, an honorary society for which she was ineligible in the 1940s because membership was then reserved for men. [32]

Ms. Shainwald has frequently been a visitor to the William & Mary Law School, meeting with students and encouraging their work. Her granddaughter, Emma Anne Shainwald, is currently a member of the undergraduate class of 2020.

The legendary United States District Judge Jack B. Weinstein, before whom Ms. Shainwald appeared hundreds of times in championing her clients' rights, has said “[Sybil Shainwald's] compassion and professional skills have ennobled the practice of law.”[33]

We could not have said it better. The William & Mary Journal of Race, Gender, and Social Justice is honored to dedicate Volume 25 to Sybil Shainwald.

FOOTNOTES for this Dedication

[3] See Keirstin Flythe, In 1945, A Call for Equality Silenced, FLAT HAT (Feb. 12, 2008), http:// flathatnews.com/2008/02/12/1945-call-equality-silenced [https://perma.cc/YGV2-BWBR] (recalling the uproar when the editor-in-chief, Marilyn Kaemmerle, argued that “Negroes should be recognized as equals in our minds and hearts For us, William and Mary; this means that Negroes should attend William and Mary; they should go to our classes, participate in College functions, join the same clubs, be our roommates and marry among us.”).

[21] Columbia University in the City of New York, Graduate School of Arts and Sciences, Dean's Award for Distinguished Achievement presented to Sybil Shainwald by Henry C. Pinkham, Dean (May 19, 2009).

[30] Award for the Guardian of Women's Health, to Sybil Shainwald, From Institute of Jewish Humanities (2015). 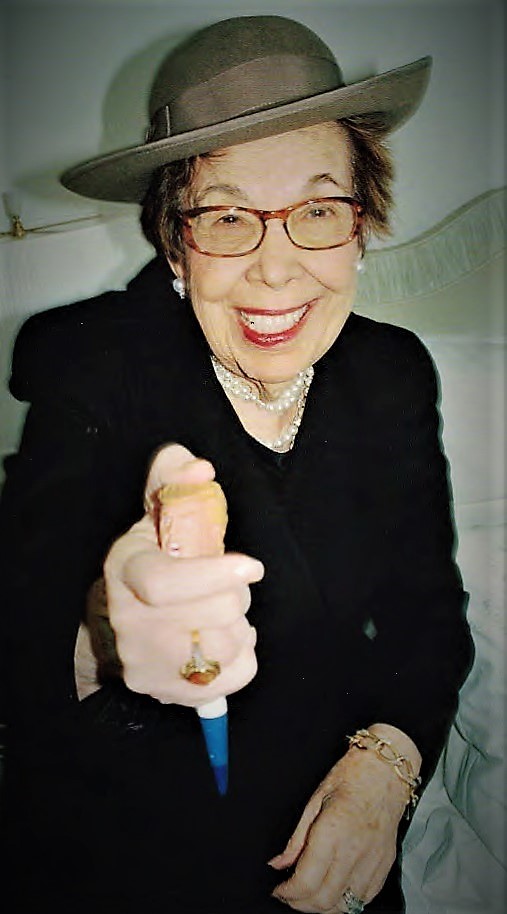